My name is James Kinch, based on the Gold Coast, and I have been involved in training Project Managers for over 10 years, as part of Training Bytesize Australia.

I get really excited looking at Project Management and telling myself “What’s the next angle a PM would be interested in?” I’m a great lover of technology (I know many other PMs are too) and I enjoy finding out how new things work.

My latest foray into technology has been Virtual Reality or shortened to VR, in fact I purchased my first headset back in 2014, an Oculus Rift, that required a massively fast computer to work, and sensors around the room to detect movement. It was pretty good as well, but lacked real software, just lots of 3d style games.  So I have had quite some time to see how the technology has evolved.

So now we fast forward a couple of technology jumps, past the Oculus Rift S, which still required a very powerful PC, to a new stand alone headset the Oculus Quest 2.  Suddenly we have a portable headset, that has the processing power, memory and sensors to work anywhere that you can get a wifi signal, the garden, your desk, even at the office.

There are a number of virtual meeting rooms, with established products like MeetingVR and Spatial, but with Facebook recently acquiring Oculus, and starting investing billions of pounds in the technology and software, and with the recent release of Facebooks new Horizons Workrooms, suddenly using VR headsets to sit and work with your colleagues in a 3D VR Project meeting from Australia to the rest of the world becomes reality, and you now have a choice of products to choose from.

We can lose the casual dress, wonky lighting, and occasional bad hair day, and we choose our own Avatar, or upload a photo, and you get a sort of cartoon version of yourself, dress in a suit of your choice, or choose a casual dress approach. What’s not to like! 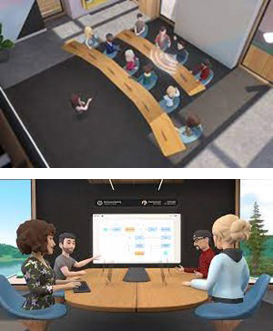 Facebook has invested heavily in VR, and with Horizon Workrooms, the VR market is now making the move from gaming to business, and they forecast that over half its meetings will be in VR at some stage soon, that’s quite a statistic.

I have set up a number of team meetings with Horizon Workrooms, and the ability to share my desktop, my files and presentations, get feedback, create and use whiteboards with multiple pens, between the group is a definite glimpse of the future of meetings. Little things like multiple room layouts, and the ability to share your computer and keyboard, so you can actually type on them in the VR world work really well

For those team members with out a VR headset, they can still join in from a PC, or a mobile device, so the whole team can combine media interfaces to meet and chat.  Using video based chats will never quite seem the same, although like all technology, everything has its place and time.

The Quest headsets are around $480 and give a run time of around 2-3 hours between charges, although you can extend battery life quite easily.  The downside is that they are only comfortable for short periods, so maybe an hour at a time, as they can get a little hot, not something you would want to keep on all day as yet. Maybe the Quest 3, when it comes, will be even lighter and faster, bring down costs even further.

As a Project Manager it helps to stay knowledgeable in new and emerging technology, and I hope this brief overview gives you a taste to find out more, and when you get asked to join a VR meeting and a Headset arrives in the post, you at least know what to expect.

If you are interested in finding out more, drop me an email to james@trainingbytesize.com.au

You don't have permission to register